This site is intended for healthcare professionals licensed in the United States. If you do not match this description, please contact us.

Fill out the form below with your information and two dates that would work for you, and we will do our best to accommodate your needs.

Thank you for contacting Neurocrine Biosciences with your unsolicited Medical Information request regarding the use of INGREZZA® (valbenazine) capsules for the treatment of tardive dyskinesia (TD).

INGREZZA is a vesicular monoamine transporter 2 (VMAT2) inhibitor indicated for the treatment of adults with tardive dyskinesia.

An extensive clinical development program has been conducted to investigate valbenazine (VBZ) including two Phase II studies (KINECT 1 and 2) and a Phase III study (KINECT 3). The purpose of this summary document is to respond to your request for a brief summary of the published literature.

KINECT 1 was a randomized, double-blind, placebo controlled Phase 2 study that investigated the safety, tolerability and efficacy of VBZ in the treatment of TD. The primary efficacy endpoint of KINECT 1 was the 6-week change from baseline in Abnormal Involuntary Movement Score (AIMS), a total dyskinesia score (score from 0 = none to 4 = severe dyskinesia for 7 body regions), as rated by the on-site investigator. A key secondary efficacy endpoint was the Clinical Global Impression of Change – Tardive Dyskinesia (CGI-TD) at 6 weeks (scale from 1 = very much improved to 7 = very much worse). Subjects were eligible for the study if they were age 18 to 85, had a clinical diagnosis of schizophrenia or schizoaffective disorder, had moderate or severe symptoms of TD, and were medically and psychiatrically stable.1

A total of 109 subjects completed the 6 week double-blind study. The measured mean change in AIMS was not statistically significant at -3.3 in the combined VBZ groups versus -2.5 in the placebo group. However, in a post-hoc analysis of AIMS scores, as rated by blinded central video raters, there was a statistically significant difference between the VBZ groups and placebo (-3.3 vs. -1.5, p = 0.03).1

A total of 93 subjects continued on to the 6 week open-label extension study. Of these subjects, 81 completed the 12-week study and 80 completed the follow-up for a total of 16 weeks. These subjects had a mean change in AIMS score from baseline to Week 12 of -5.8 with 54% of subjects achieving a response, defined as a ≥50% reduction in AIMS score. The mean CGI-TD score at 12 weeks was 2.5, with 61% of the subjects meeting the responder definition with score of 1 (very much improved) or 2 (much improved).1

At the completion of the open-label extension study (end of week 16), a total of 41% of subjects reported treatment emergent adverse effects (TEAEs), most commonly urinary tract infection (5.9%), diarrhea (2.9%), fall (2.9%), fatigue (2.9%), increased appetite (2.9%) and somnolence (2.9%). Eight subjects discontinued the trial due to a TEAE (n=1 placebo, n=1 VBZ 100 mg and n=6 VBZ 50 mg), none of which were reported as study-drug related. No clinically relevant changes were observed in laboratory and ECG values and no safety signals emerged from the select scales monitoring psychiatric status.1

KINECT 2 was a randomized, double-blind, placebo-controlled Phase 2 study that investigated the safety, tolerability and efficacy of 25 mg, 50 mg or 75 mg VBZ in the treatment of subjects with moderate to severe tardive dyskinesia with underlying schizophrenia, schizoaffective disorder, mood disorder, or GI diagnosis. The primary efficacy endpoint was the change from baseline of AIMS total dyskinesia scores at 6 weeks. The severity of TD was assessed by the total dyskinesia score as rated by the central video scorers blinded to treatment arm and study visit sequence. The secondary efficacy endpoints included the CGI-TD and the Patient Global Impression of Change (PGIC) at 6 weeks (scale from 1 = very much improved to 7 = very much worse). Subjects were eligible for the study if they were aged 18 to 85, had a DSM-IV diagnosis of antipsychotic-induced TD or metoclopramide-induced TD for at least 3 months before screening, had moderate or severe TD based on qualitative assessment, and were medically and psychiatrically stable.2

Subjects were randomized 1:1 to receive either placebo or VBZ, beginning at 25 mg once-daily. VBZ dose was escalated by 25 mg at Weeks 2 and 4 to a maximum of 75 mg once-daily, contingent upon investigator’s clinical judgment and patient’s response to and toleration of VBZ starting dose. Responders were defined as subjects with either a 50% or greater reduction in AIMS score or a CGI-TD or PGIC rating of 1 (very much improved) or 2 (much improved).2

A total of 205 subjects were screened and 102 were randomized 1:1 into treatment and placebo groups. The final Intent to Treat Analysis included 89 subjects, with 76% of subjects in the VBZ arm and 80% in the placebo arm reaching the maximum 75 mg dose. Baseline characteristics were generally similar between the placebo and VBZ groups, including mean age (55.3 vs. 56), proportion of males (49.5% vs 47.6%) and mean AIMS score at screening (7.9 vs 8).2

KINECT 3 was a randomized, double-blind, placebo-controlled Phase 3 study to assess the efficacy, safety and tolerability of VBZ in the treatment of TD. The primary efficacy endpoint was the mean change from baseline (CFB) at end of Week 6 in the Abnormal Involuntary Movement Scale (AIMS) dyskinesia total score (sum of Items 1-7) for VBZ 80 mg vs. placebo. AIMS scoring was based on the consensus of two blinded, central video AIMS raters. The key secondary efficacy endpoint is the Clinical Global Impression of Change-Tardive Dyskinesia (CGI-TD) mean score at Week 6 for VBZ 80mg vs. placebo. Additional secondary endpoints included AIMS score CFB to Week 6 and CGI-TD score at Week 6 for VBZ 40mg vs. placebo. A per-protocol (PP) data set, excluding subjects without detectable VBZ plasma concentrations, was pre-specified for supportive analyses. There were 234 male and female subjects randomized 1:1:1 to receive placebo, VBZ 40mg, or VBZ 80mg once daily for a 6 week period (Figure 3). To control for multiple comparisons, the pre-specified statistical analysis plan (SAP), required that efficacy analyses be tested for significance in a fixed sequence (80mg AIMS → 80mg CGI-TD→ 40mg AIMS→ 40mg CGI-TD). If significance for a given endpoint was not achieved, then the following endpoint was precluded from testing for statistical significance.3

Subjects were eligible for the study if they were between the ages of 18 to 85 with a clinical diagnosis of schizophrenia or schizoaffective disorder with neuroleptic-induced TD or a mood disorder with neuroleptic-induced TD for at least 3 months prior to screening, had moderate or severe symptoms of TD, and were both medically and psychiatrically stable. Subjects were excluded from the study if they had a comorbid movement disorder more prominent than TD, known history of substance abuse, violent or suicidal behavior, neuroleptic malignant syndrome, or prolonged QT syndrome.3 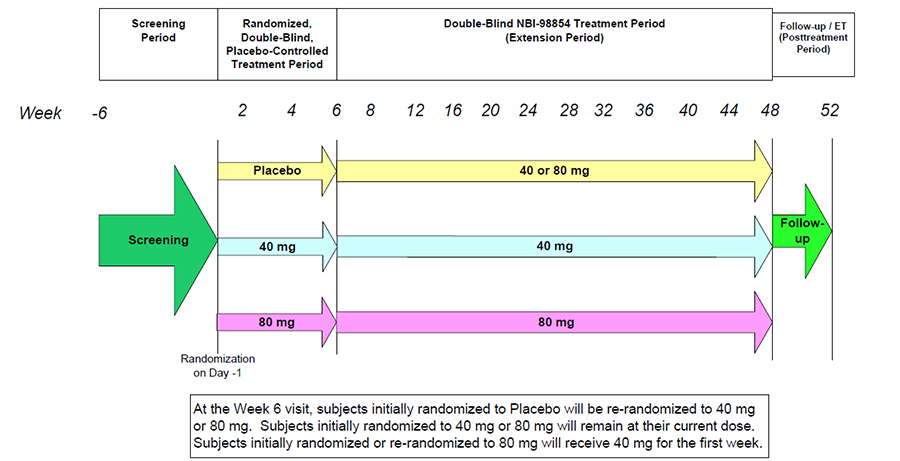 Of the 234 randomized subjects, 205 subjects completed the 6-week placebo-controlled treatment period. Demographics were similar across treatment groups (Table 1). The AIMS least squares (LS) mean score significantly changed from baseline to the end of Week 6 in the VBZ 80 mg group in comparison to placebo (-3.2 vs. -0.1, p <0.001). The CGI-TD results did not reach statistical significance for the 80mg (p = 0.0560) intention to treat (ITT) group. Per the fixed-sequence testing procedure stipulated in the SAP, supportive analyses were performed for the 40mg Week 6 AIMS change from baseline (p = 0.0021) and 40mg CGI-TD (p = 0.0742) but precluded testing for statistical significance (Table 2). For the AIMS score LS mean change from baseline by study visit, statistically significant differences between the VBZ groups (80 and 40mg) and placebo were detected at weeks 2, 4, and 6.3

*Assessment of statistical significance of p-values precluded based on pre-specified, fixed-sequence testing procedure

Subjects who completed the DBPC period in the KINECT 3: Phase III Fixed-dose Study continued to a 42-week double-blind VBZ extension (VE) period and a 4-week follow-up. Those initially randomized to placebo were re-randomized 1:1 to VBZ 80 or 40 mg/day and those initially randomized to VBZ 80 or 40 mg/day continued at the same dose. Subjects re-randomized to the higher VBZ dose received 40 mg/day during the first week of the VE period. Outcomes assessed in the VE period included the AIMS score change from baseline to Week 48 and the Clinical Global Impression of Change-Tardive Dyskinesia (CGI-TD) score at Week 48. The CGI-TD ranges from 1 (“very much improved”) to 7 (“very much worse”). As in the KINECT 3 DBPC phase, AIMS scoring was based on the consensus of two blinded, central video AIMS raters.4 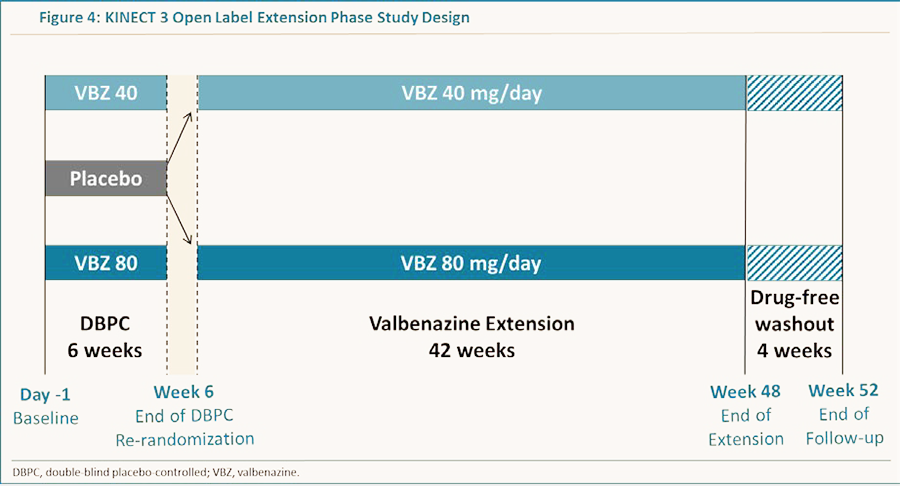 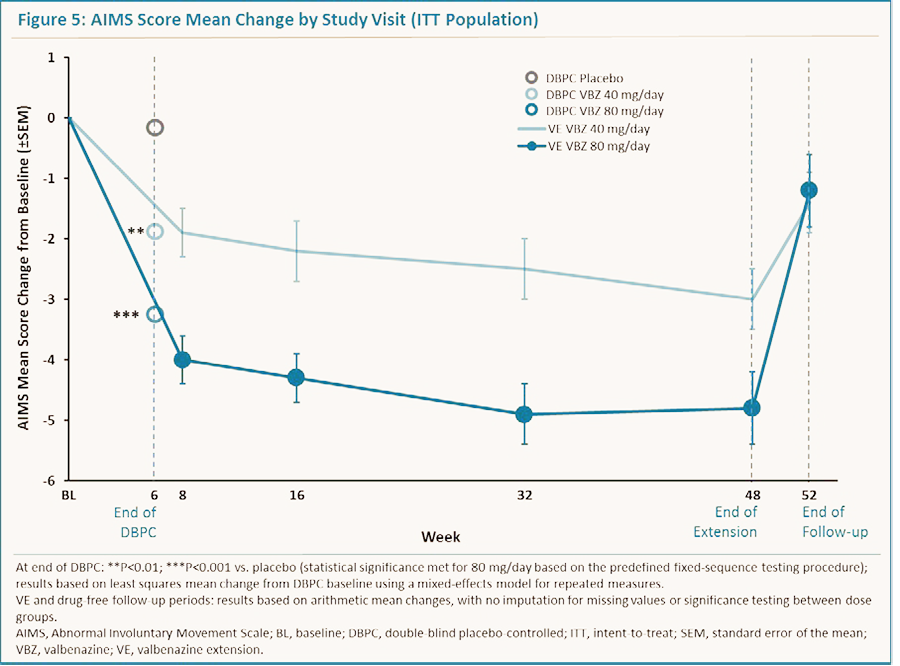 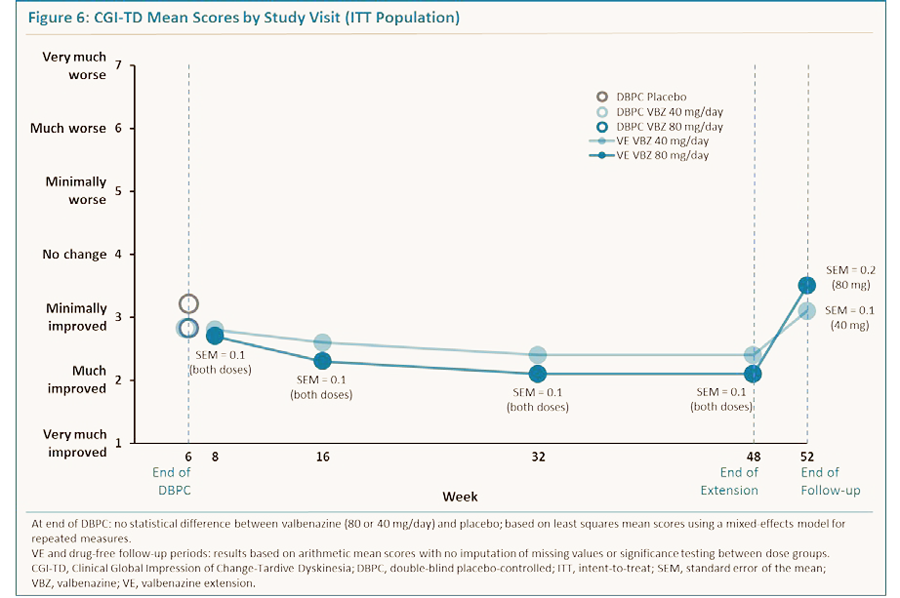 At Week 48, 52.4% of subjects on VBZ 80mg/day were AIMS responders (> 50% reduction in AIMS total dyskinesia score from DBPC baseline). At Week 52, after washout period, AIMS responder rates in both VBZ dose groups were lower than the responder rates observed at all study visits during the VE period while subjects were on treatment (Figure 7).4 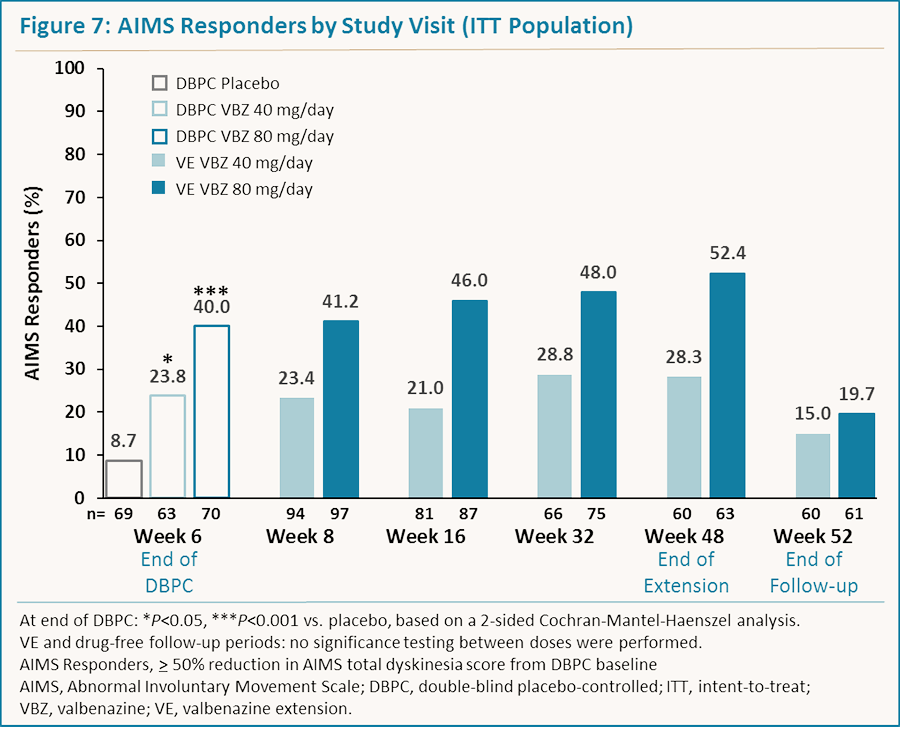 The most common reasons for discontinuation from the VE period were AEs (15.7%), withdrawal of consent (8.6%), and loss to follow-up (7.1%). Of the 198 subjects included in the VE safety population, 69.2% had >1 serious AE. Individual AE rates for the VE period have not, yet, been reported in the literature and are currently in press.4

This letter and the enclosed material are provided in response to your unsolicited medical information inquiry. Please feel free to contact Neurocrine Medical Information at (877) 641-3461 or medinfo@neurocrine.com if you would like to request additional information.

Need to get in touch with us?